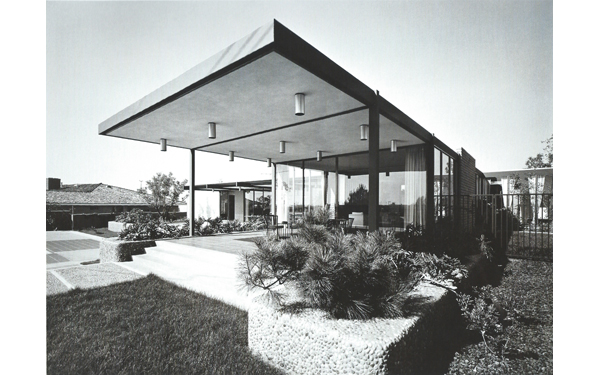 Innovative, economical, and poised, the architecture of Donald Wexler, FAIA, designed and built over his more than six-decade career, remains a hallmark of Palm Springs’ landmark status as a national and world center of Modern Architecture’s best work. Wexler’s work shows a keen sense of proportion and sensitivity to its sites and climate, and his designs celebrate the essential roles of structure, light, and space.

A number of Donald Wexler’s key buildings are being nominated for recognition on the National Register of Historic Places. Come see extraordinary images of some of the very best of Donald Wexler’s remarkable yet underappreciated body of important architectural feats, from beautiful homes for celebrities and unique residential inventions to exceptional public buildings such as Palm Springs’ own International Airport main terminal. Palm Springs Modern Committee is proud to exhibit some of Wexler’s creations for continued appreciation and learning, at the Main Atrium of the Palm Springs Public Library, throughout the month of February.

Join Modernism Week for an exclusive tour of this featured private home in South Palm Springs, affectionately called “Maison a l’Orange.” The Palm Springs design team of Howard Hawkes and Kevin Kemper of H3K Design worked closely with the owner over the past year customizing the house for the owner’s enjoyment, but also as an expression for her love of Midcentury Modern architecture and Palm Springs. The walls of glass, a soaring roof line, and a Googie-inspired lounge make Maison a l’Orange the pièce de résistance for MCM enthusiasts.

The history of the home dates back to 1960, when famed Glendale-based architect Clair Earl designed 3 neighboring houses on LaVerne Way in Palm Springs near the Alexanders’ Twin Palms development. These houses are magnificent examples of MCM architecture, each with their own characteristic look. Sadly, this house sat in severe disrepair and neglect over the past decade. Nicknamed Maison a l’Orange for the current owner’s love of the color orange, the house was recently finished with a complete renovation and will be unveiled for the first time during Modernism Week 2018.

Walk among the stars in this prestigious and historic neighborhood. Old Las Palmas began its development in the late 1920s and 1930s and has one of the highest concentrations of celebrity homes anywhere. Elizabeth Taylor, Kirk Douglas, Katherine Hepburn, Gene Autry, Lena Horne, Cary Grant, Judy Garland, Dinah Shore and many other Hollywood stars have been residents here.

This must see neighborhood truly nurtured Palm Springs’ reputation as The Playground of the Stars. Today Leonardo DeCaprio boasts a celebrated Modernist home in this exclusive neighborhood. Spanish Colonial architecture with its signature red tile roofs abounds, but examples of dramatic and significant midcentury architecture are sprinkled in the area. You will hear surprising tales of the stars who lived and martini-ed here.

With the luxurious El Mirador as its centerpiece, the Movie Colony was developed in the 1930s and 1940s. In this tranquil neighborhood lived some of Hollywood’s biggest stars such as Cary Grant, Dinah Shore, Van Johnson, Tony Curtis, Gloria Swanson, and Jack Benny. Frank Sinatra made it “his” neighborhood in the 1950s when his home, known as “Twin Palms,” became party central. One of the celebrity estates here was called the “Desert Royal Palace” because so many Europeans with royal titles and Hollywood elite were guests there.

Some of our most renowned Modernist architects designed homes in this charming and prestigious area including E. Stewart Williams, William Cody, and Donald Wexler. It is home to iconic architecture of the Spanish Colonial Revival style as well as the Midcentury Modern style. This tour affords a visual feast of residences of Hollywood Royalty and unique architecture.

A House with Two Faces – San Francisco – by Jensen Architects